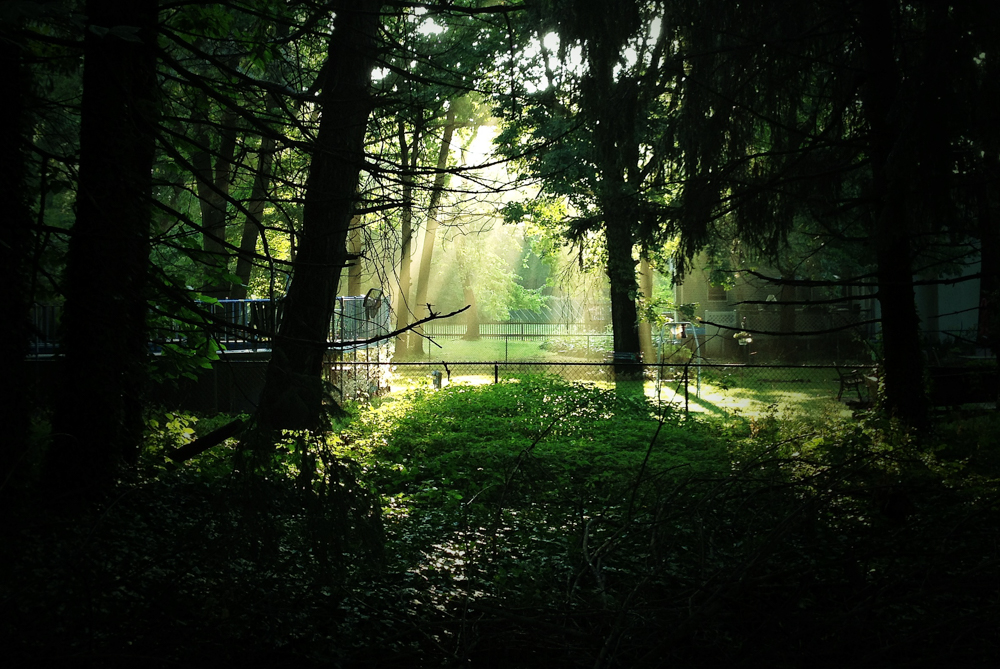 The stories we choose to tell and choose to believe are just as powerful now as when we were children.

Most mornings of my childhood, I’d wake up to the smell of cow manure, the sound of a lunatic rooster crowing, the call of the wild. Just down the hill from my house, there was a giant, crudely-built sheet-metal barn that housed tractors and disc plows and hay balers and other large equipment that belonged to the farm next door. I can’t ever remember seeing this equipment being used for farm purposes, but it served well as our playground.

The barn sat up against a narrow patch of thick woods, and the area just behind the barn was littered with junk. Not “bags of garbage” junk, but “abandoned machinery, old cars, rusted-out barrels of axle-grease” junk.

In particular, there was an old corn harvester that was for some reason half-buried in the side of a hill. When I describe it now, my grown-up self thinks about how much of an eye-sore it must have been, but as a child, this was magic. It was a space station, and we were astronauts. It was an prehistoric relic, and we were archeologists. It was a tank, and we were soldiers.

We spent so much time and lavished so much imagination on this apparent piece of junk, that it stands out in my mind as one of the more important parts of my childhood.

A few years ago, I read an inspiring “Humans of New York” story about how, as children, we create these “magical play spaces” out of ordinary things and locations. It was a short piece, but it got me thinking a lot about the power of the imagination, and how even as young children, we construct stories about our lives and our surroundings and we take all of this seemingly meaningless stuff, we cobble it together and we infuse it with purpose and story and suddenly it becomes bigger than the sum of its parts.

My memories are filled with magical play spaces. We built a watchtower, a fort, and a graveyard up on the “summit” of the 600 foot mountain (might as well have been Everest) in the woods behind our old home, complete with a mythology of how it came to be. We carved a giant maze of tunnels into the rye field behind my grandmother’s house. Even our old, scary basement with its weird nooks and broken-out concrete passages took on a history that was probably more colorful than reality.

The woman in that “Humans of New York” story concluded her theory of magical play spaces by saying, “I think we lose that in adulthood.” But I disagree.

I don’t think they’re as fanciful or as far-fetched or as our childhood spaces, but I think we still have spaces that we imbue with imagination, possibility, meaning. For example, my office. I decorate it, fill it with my toys and I get to be who I want to be. This is the place where I create, where I get to be Jesse the web designer, the photographer, the author. My workshop is where I’m Jesse the aspiring carpenter, ne’er-do-well fix-it guy. And at our new home, instead of creating false histories, I’m looking for the real histories of these places and this area, trying to better understand what made it what it is today, in an attempt, perhaps, to better understand the role that it will play in shaping my own story.

But ultimately, the magical play spaces are about story, and imagination, and possibility. And the stories we choose to tell and choose to believe are just as powerful now as when we were children.