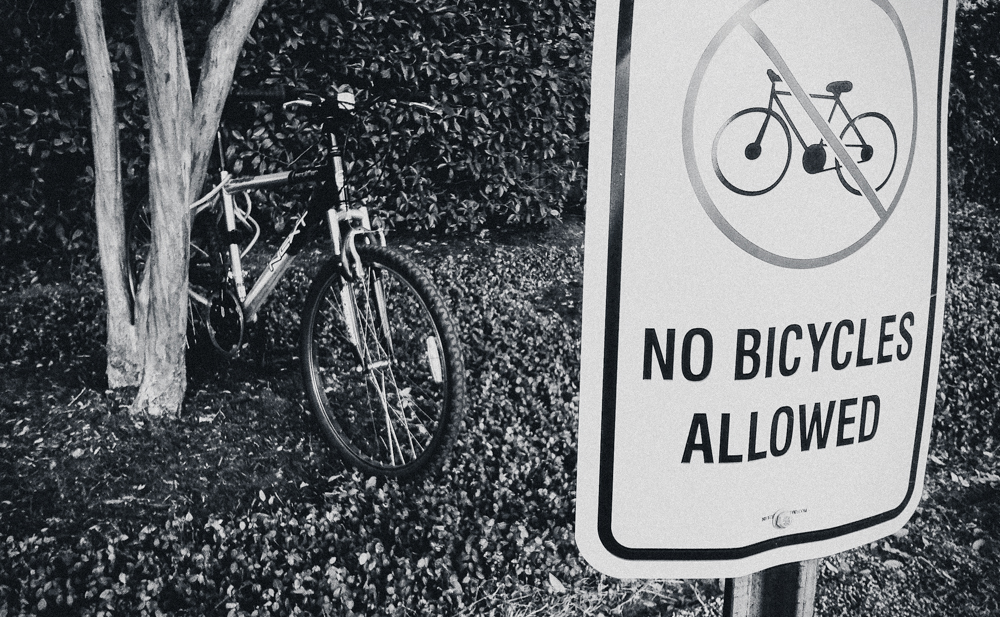 My last few posts have been pretty cerebral, so I decided to make this one a bit lighter. And by lighter I mean full of pain and suffering and laughter at the expense of my former self. I’m going to tell you a story about one of the worst weeks I’ve ever had.

I’m working my way through college—this small, Christian school down in Florida, and I had a job off campus at the mall.

I had no car, I had this no-name brand mountain bike my parents had bought me that I’d ride to work. And it was a pretty terrible ride. The highest point in Florida is what? 300 feet? That was the incline I had to bike on my way to the mall. It was a 25-30 minute ride, and the majority of the it DIDN’T have sidewalks and the roads were basically two-lane highways, so picture it: me, dress-shirt and tie, speeding down the shoulder with cars whipping by me, horns blaring.

So one day, I’m running late for work. I race off campus, down under the 110 overpass, past the Waffle House with my tie fluttering in the wind, trying to avoid the 3 drainage grates while balancing my bike tire on the 3-inch strip of asphalt, race up to the mall, bike in the bike rack, don’t have time to lock it up, should be fine, it’s a short shift today… and I’m sure you can see where this is going.

Yup. After my shift, the bike was gone, no where to be found. Ugh. I don’t have enough money to buy a bike.

Thankfully, a friend let me borrow his. Quick aside: our college had a rule against borrowing vehicles—they compared it to stealing. Not exactly sure why, but it was one of those weird rules most everyone just ignored.

So I borrow his bike, head off campus, down under the 110 overpass, past the Waffle House, tie fluttering in the wind, avoid the drainage grates, ignore the horns, pull up to the mall with plenty of time to lock it up, which I do.

Halfway through my shift, it’s lunchtime, so I head to the foodcourt to get something to eat. I don’t have much money, so I decide to get a burger from Wendy’s and an egg roll from the Chinese restaurant. I get the burger from Wendy’s and put it down at a table near the Chinese restaurant, then I get in line for my egg roll. I’m kind of lost in thought, still a bit wound up from my bike being stolen. Get the egg roll, walk back to the table and… my burger is gone.

At first, I think I’m at the wrong table, so I look around, feeling dumb. But as I’m looking around, I see it. There’s this kid at the far end of the food court—and he’s got my burger. He had literally just finished unwrapping it, looked me right in the eye, took a bite out of it and walked out of the mall. I was so upset… I’m a pretty trusting guy, so this was just… deflating for me. I rode my bike home with this cloud hanging over me.

Next day, I head to work, this time a bit slower—feeling the weight of my victimhood. I head off campus, down under the 110 overpass, past the Waffle House with——BAM. A truck guns it out of the Waffle House parking lot and smashes into me. I fly off the bike, the handlebars get twisted parallel to its front wheel. I jumped up and the guy leans out the window and asks if I’m alright, and I’m just stunned, so I pick up the bike, wave him off, tell him I was fine, straighten the handlebars and just keep going.

This week just could not get any worse, I thought. Then, Hurricane Opal hit. Back then, we didn’t have weather apps, we just just listened to the weatherman on tv or the radio, but I didn’t have either. Now, I knew there was an impending hurricane, but they typically take a while to make landfall and… I needed to get to work. I was a freshman and I didn’t know anyone with a car, so I biked to work. When I finished my shift that day, it really dark outside, but I thought, if I hustle, I might be able to beat the rain.

I didn’t beat the rain. And my tie wasn’t fluttering in the wind, it was drenched with rain, along with my dress shirt and slacks and shoes and underwear. In fact, It rained so hard, that there were stretches of road flooded so deep that my bike pedals were literally being submerged as a I rode.

So that has to be the end of this terrible week, right? How do you get worse than a hurricane? Well, after the hurricane, someone actually stole my friend’s bike off campus. It turned up at the local Walmart and the police returned it to campus security who called my friend who called me. And when all was said and done, we both ended up in trouble for a violation of the borrowing policy—25 demerits.

And that was the most comically awful week I’ve ever had.

Until I got kicked out of college, but that’s a story for another day.