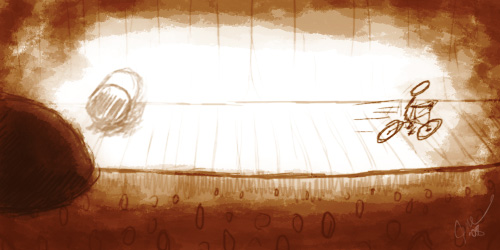 I was seated in the very front row of a large yet intimate theater. The lights were still up and I sensed that we were waiting for the show to begin. To my right was what appeared to be a gigantic inverted bowl suspended in midair. It seemed to be made of the same material as a cheap plastic cup, and because of its size, it wobbled when I touched it.

On stage, there were all sorts of odd contraptions: several bikes with large flat pieces of metal welded to their frames, a rusted swingset, a PVC pipe large enough for a man to walk through standing up (to name just a few).

The show must have been late because a murmur began to grow in the audience and soon people began shouting for the performers to come out. Finally, a man appeared at the back door and announced to the crowd in an unnerving flat voice that the art was, in fact, how the audience would respond to the items on stage. It was a study, said the man in the back, of the absurd and of how people respond to the absurd.

Everyone sat in silence for a moment.

Then I jumped up out of my seat, mounted one of the more interesting bikes and rode out the stage exit door and into off into the night.

In the name of art, of course.