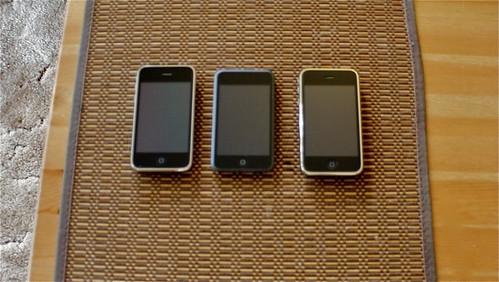 Someone recently asked me what I’d consider my most important iPhone apps, so I decided to put this list together. Let me first say that I didn’t include Facebook and Google in here because I’m assuming everyone who needs them has them.

Who needs satellite radio when you’ve got Pandora? I can craft my stations and listen anywhere, even over 3G and Edge networks. I’ve heard rumor that Pandora are facing some broadcast fees and may be shutting down, but for now I’ll enjoy my stations, thank you.

I can finally use Skype like a real phone. Really just a lovely experience, though it does not work over 3G or Edge (some contractual limitations). I use it now in lieu of the desktop version.

5. Around Me (resource locater)

This is a very handy little app that uses your current location to display all kinds of services in your area: banks, bars, coffee shops, gas stations, hospitals, hotels, theatres, parking, pharmacies, restaurants, supermarkets, taxis and even weather. It’s integration with the rest of the phone (maps, calls) is nearly flawless.

I’ve come to expect the whole IM experience to occur in the background, so any iPhone IM client is currently at a disadvantage. As soon as you exit the app, you’re logged off. But for what it does, I’ve been pretty pleased with Beejive (you can also manage multiple accounts).

Non-guitarists can probably pass on by, but if you frequently play guitar, this is a fairly useful app especially considering the price. You need a fairly quiet environment for it to work well, but I’ve had little complaints after using pretty regularly for a month. You just can’t beat the convenience of always having a guitar tuner in your pocket.

I’m one of those disturbed folks who reads wikipedia for fun, and Wikipanion is very conducive for casual reading. Very streamlined browsing experience with several useful options you can set. My favorite feature is the “random article” button.

If you’ve not used Mint.com, you should—it’s an unbelievably useful way to keep track of and stay notified about your money. If you’ve used Mint.com, this app is just further extension of the site’s usefulness.

Flickr’s mobile site is pretty useful, but Darkslide integrates pretty seamlessly with the phone. As of the writing of this article, Darkslide doesn’t handle Flickr video, which is a pretty big letdown. You could probably pass this app by unless you’re a hardcore Flickr user.

I use this far less now than before I got the Around Me app, but the whimsical “shake to choose” slot machine approach is fun so I’m keeping it around.

Record a snippet of music that you hear playing and Shazam will tell you what it is and how to purchase it. I use this less than I thought I would—probably because I don’t get out much, but it’s still worth mentioning (if you haven’t already heard of it).

Sometimes you just have to SSH.

The quintessential iPhone game. Line up colored gems and move on to new levels. Very simple, a lot of fun.

Fieldrunner meets Tron. Stop the enemy onslaught by building guns, rockets and lasers. There are some fun twists that add some complexity and lots of replay value to the game. Been playing for almost a month and haven’t beaten all the levels.

Land planes with your fingers. Sounds easy? Beautiful graphics, three levels and fun bluetooth multiplayer modes (pass planes to your friends)—this is a must have.

What can I say? I’m a sucker for word games. This Boggle clone is well executed and integrates nicely with Facebook, though the challenge other players feature is a bit glitchy (why no real time?) and leaves something to be desired.

Bounce a ball against pegs and make them disappear. Almost as much fun as the full desktop app (essentially the same gameplay and levels). I say almost because it’s a bit cramped for everything that’s going on, but still worth the $.

You’re given several mechanical pieces that you must use to accomplish certain goals. Maybe I’m just not Rube Goldberg, but some of these levels are very difficult!

It’s a deceivingly simple concept: shoot stones at other stones and match up three or more to make them disappear. But the special power-ups, complex boards and massive number of levels make this game a winner.

Probably one of the more unique games I’ve played. You must navigate the cube with your finger around Qbert-esque levels, solving puzzles and achieving hangtime.

This is one of the most impressive apps: play your iPhone like a flute. Music you play is simultaneously broadcast to the internet allowing others to listen to you play.