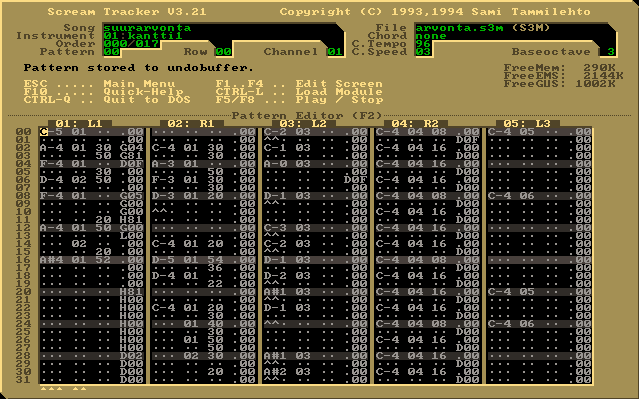 I know you’re not supposed to start blog posts with qualifications, but I honestly don’t know how to weave this all together. So, stream of consciousness is my medium of choice tonight. Beware.

Back in the early nineties, while everyone else was sporting New Kids on the Block slap bracelets, I was holed up in my basement with two gigantic speakers on either side of my desk, an old school 486 PC that I’d built from scratch and a Gravis Ultrasound pumping out the latest .mod files) from Europe. To this day, I’m not sure how they made it all the way round the globe and onto the mom-and-pop BBS I used to dial into; but there they were, the roots of electronica in all their 8-bit, 4-channel glory.

You see, for a long while, I’d been getting by on MIDI files. But you can only listen to an FM synthesized version of Beethoven’s 5th just so many times. The drums sounded like static buildup from an unshielded audio cable. Then I heard my very first .mod file: Space Debris by Captain (listen to it). It absolutely blew me away. Such rich sound coming from my computer?

And so my love affair with electronica (or techno as we all called it back then) began. I downloaded Scream Tracker and begin spending every waking moment learning it’s intimidating ins and outs. Pretty soon, I could make great music without giving a moment’s thought to the hex codes I was entering in to make it all happen. Later I downloaded Impulse Tracker which allowed even more channels and greater instrument control.

I worked a lot towards realism in my tracks. In fact, most of the songs on my Transcendency album were written, at least in part, in Impulse Tracker using mostly samples I ripped from other musicians. (I’m looking at you, Victor Vergara.)

Right now I’ve got several hundred unfinished songs on my machine that will probably never see the light of day. Some are just one or two measures of great drum solos or catchy guitar riffs, but some are full fledged “nearly there” songs that I never got around to the final push. That all changed when I discovered Renoise for the Mac, a fantastic tracking program with lots of options and a really handy free version. If you’re curious and want to explore the world of tracked music, I suggest you grab some of these music files which are being graciously given away for free by Skaven of the Future Crew.

Future Crew was a group of the best and brightest trackers on the scene. They actually used to combine their musical tracking abilities with their coding abilities to create what were called “demos”—real-time animations that defied the slow processors and limited graphical capabilities of computers in the day. I credit these folks with being on the cutting edge of electronica and bringing electronic music to the masses. As an homage to them, I’m going to close the post with a video of their most famous demo, Second Reality: